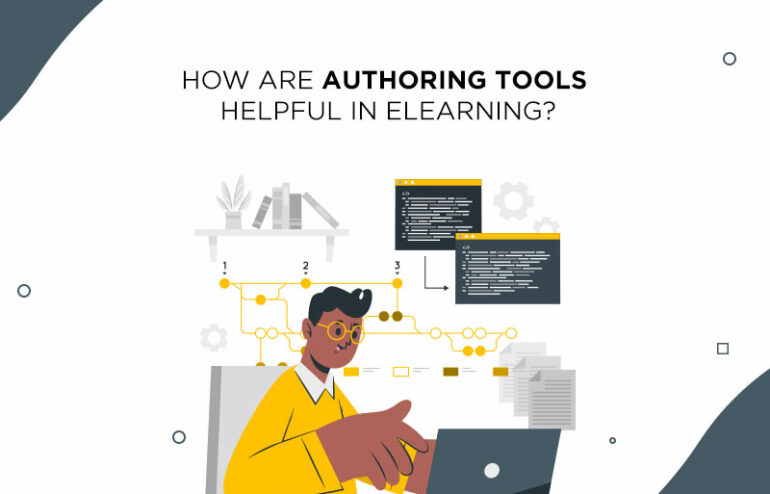 How are authoring tools helpful in elearning?

Elearning can be done easily with prebuilt templates as they are present in the authoring tool.

Rapid authoring means the use of templates and assets to generate learning content. A template can mean a single screen layout to slide layouts which correspond to the same design. However, as you gain more experience, you realise that pre-built templates are not enough. All the templates do not meet the standard.

There are many authoring tools, such as Lectora, Storyline 360, and Captivate which have templates available. Adobe Captivate also includes stock images. However, the templates of Lectora are preferable because they can be changed. These templates are from an AssetLibrary which includes the complete source. So, the background of such templates can be changed, changing various objects.

There are also object states which you change in Lectora. For example, you can make sure when you hover on a button, its colour changes to the brand colour, rather than colour grey. But it’s important to have the source file of the template to be able to make such change.

There are also character images that are part of a course. Such characters can be of use to IDs because they can use them to convey emotions. Apart from that, characters with different ethnicities are given. This makes sure that the IDs can represent various cultures. You can use two characters to create a conversation between them to represent a scenario. The characters in the elearning tool have different emotions and props too. You can also get characters from the internet and upload into your authoring tool to be used in the course. These characters can be in the form of PNG images.

Apart from characters, the other vector graphics such as objects are also present in the elearning tool. You can use them to ensure that you display the necessary objects in your course. You can resize these graphics. Icons are also present in an authoring tool.  You can also use icons rather than bullets in a course. For being able to use such vector graphics and icons, you must have checked the stock library of the authoring tool that it contains such items.

These are also important parts of an elearning video. But you will need to get the help of a production company if you don’t have the audio or video in the authoring tool. You will have to get the audio recorded from the production studio. You can save money and time if the assets such as background music are given in a course. Apart from that, there should be various sound effects also.

There is also the feature of text-to-speech in authoring tools such as captivate. Although it consists of machine-based voices, it can be quite helpful as compared to recording sound in a studio. Such a text-to-speech feature helps in rapid authoring.

Another benefit is video clips. Its because the audience pays more attention to such videos. Such authoring tools also have screen transition effects and object and character animation effects. You can check all these features in an authoring tool. It’s important to check them before you start developing a course. You have to compare various authoring tools that include such characters, text-to-speech feature and character animation etc. The important thing to check is whether you want to give a course to the CEO created through these templates.