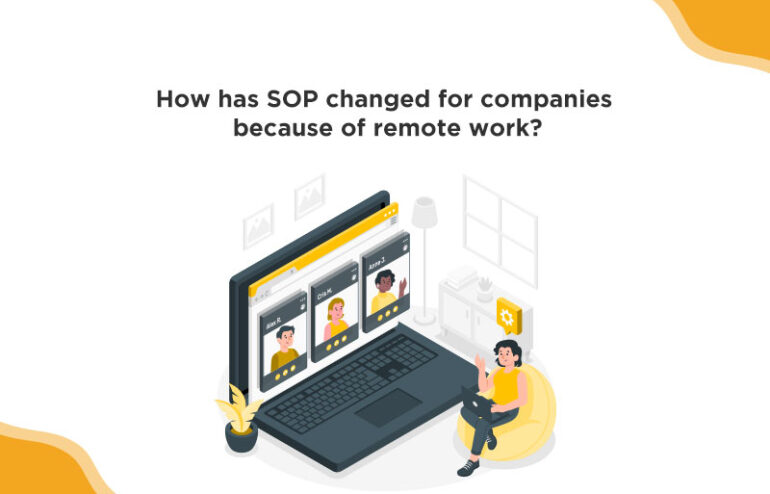 How has SOP changed for companies because of remote work?

Companies want to make their employees aware of everything to get the best output from them. Hence it’s not so easy because company requirements change quite often.

The companies inform the employees about the standard operating procedure (SOP) on the LMS.

These procedures have to be changed regularly because of new compliance rules. Now the virus has also made it mandatory to change SOP for a company.

For example, the Center for Disease and Control in the USA has issued some guidelines for managing workplaces in the wake of the pandemic.

For example, it required companies to ensure that employees with symptoms should work from home. It has also recommended tests for such employees such as an antibody test etc. The employees are supposed to inform their supervisors about their current condition. Hence there is an SOP for such employees.

The initial task before the company is to give hard copies of the SOP to the employees. The soft copies could be sent to their official email addresses. But many people are now working from home and it’s better that instead of sending it to official email ids, because people don’t get time to check mail, it’s better to update them on the LMS.

Make sure that the LMS is updated on a cloud-based server that can be used by all the devices. So, employees can access the LMS irrespective of where they are situated.

The companies are also changing SOP because employees have been working from outside offices. They have started using new technologies.

Another part of the updated SOP is to make employees learn about the LMS. Although they have been provided access to it, they may not know anything except logging on to it. When they have gone through the SOP, they should also be told how to attempt the assessments. The employees can be given a course aiding them in accessing the SOP, where the main aim should be that it can be seen on mobile devices.

What should be included in an SOP for remote work?

Although employees have been given LMS training in an SOP they have to give regular reports also. It’s because the employees might not be working efficiently. After all, nobody is there is monitor them. All the following information should be included in the SOP.

Employees should be told in advance that they have to install video conferencing tools on their home computers, for example, Zoom should be installed on every PC.

However, if they can’t install Zoom, there are other apps like Trello and Google Hangout. Video links can be shared with employees in the SOP about how to install these applications and use them.

They can also be given instructions on how to use company software if a new process has emerged.

This is especially necessary for call center executives working from home because the pandemic has imposed certain communication protocols for dealing with foreign customers. All this has to be mentioned in the SOPs.

These employees are at the highest risk of contracting the disease. Hence they have to be informed about how to manage where they live. It is because they can contract the disease if their living conditions are not safe.

So, all this information can be included in an updated SOP uploaded on the LMS.