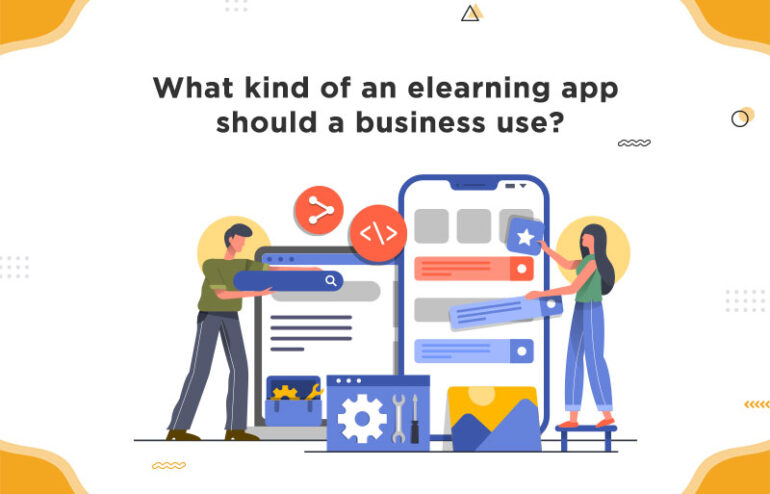 What kind of an elearning app should a business use?

The e-learning industry is now geared towards native apps, i.e., an app built solely for a single OS, either android or IOS. Moreover, having a native app is a safer option for a company because it has only one codebase, either Java or Objective-C, so there can’t be many bugs.

But a cross-platform app is developed using two code bases for compatibility with both IOS and Android-based phones, so its development time is less and can be used on both the operating systems.

However, native e-learning apps don’t need an internet connection, unlike a cross-platform app, which is beneficial because users can access them without using any mobile data.

Moreover, these apps are ideal ways to ensure that users can access them without public Wi-Fi at any location, which implies that accessibility will happen regardless of location.

Besides, the native app uses the hardware and the software of the OS and the mobile phone. Native apps have the advantage that since they are based on a single operating system, they use the system’s features such as memory management, location tracking, etc., and deliver the best app performance. They can also be linked to the other native apps used on the phone. Hence, they can easily use the device’s capabilities such as push notifications and microphones.

But a business needs to decide whether it should outsource the app development or not.

In house development or outsourcing?

E-learning companies in the USA have full-fledged experience in creating such apps. They have a suitable variety of resources at their disposal. They also proceed meticulously with a plan of action. The first phase consists of Story Analysis, which includes developing the inputs and outputs of the app based on collaboration with end-users and managers. After the information flow has been decided, it’s time to create a Prototype consisting of the front end and the backend of the app. Then the third stage is to Determine the Technology Stack, whether it should be IOS or Android. These technologies are also dependent on performance and the app’s scalability, like how many users will access it at a particular time. Once all the considerations are taken into account, the US’s e-learning companies then decide on the Action Plan, like how the app will be developed, the time frame, etc.

Companies can’t save costs by using some free frameworks on the internet for app development because they may have to pay extra for more features. Developers have to be hired if they want to offset such additional payment. On the other hand, when a business takes the help of one of the e-learning companies USA, the app costs are decided in advance and released on time.

E-learning companies USA can guide a business on what app they need depending on their budget. A native app is an expensive option because the two codebases have to be written for Android or IOS. These costs can only be averted once you decide not to launch the app for one OS to avoid development costs, but it will restrict the accessibility of your app. Hence, a cross-platform app that works on both IOS and android is a better option because it requires a lower development budget. So, depending on the scale of your business, the app type can be chosen.

If security is a consideration because the app stores the confidential data of users of e-learning companies, then it’s better a native app is preferred because it uses the security features of the OS. The native app developers can include many features, such as file encryption, by using the OS libraries. So, the users can easily upload a file without the fear of it being accessed by hackers because it can’t be decrypted. So, if the e-learning app belongs to banks and hence contains confidential information about the processes, then a native app is a better option.

The customer experience also decides which app should be used, whether native or cross-platform. It’s because native apps deliver a better user experience since they can use OS libraries, and hence they are customizable in the future. The learner engagement can be increased multifold once the native apps deliver them a better UX. The UX decides their app journey, and without the right one, the customers leave the app sooner than desired. E-learning apps need to focus on better UI capabilities because they must have features like gamification. It’s an integral part of e-learning; with native apps making use of an OS’s existing libraries, they are a better choice for an e-learning app, and be it for medical e-learning or compliance training purposes.