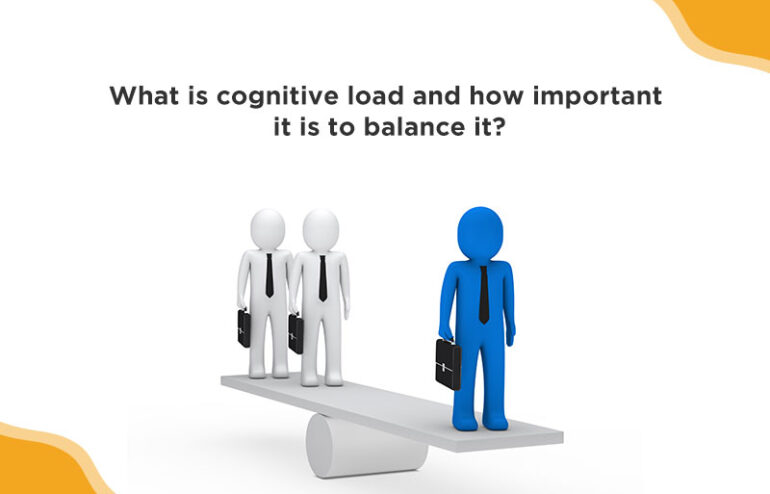 Elearning has become an important part of imparting learning these days. Henceforth content has assumed such an important role. The biggest problem before an instructional designer is to figure out how much employees can learn. The theory of cognitive load can ensure that the employees should be provided with the level of knowledge that they are capable of handling. This knowledge should be in a format, that employees can comprehend so that your training serves some purpose.

The most important part of cognitive load is to decide how much information employees can grasp.

It’s because the human brain is like a sponge and can’t grasp more information than its capacity allows. So, it’s important to decide the cognitive load beforehand to design a course. Apart from the level of information, the capacity to absorb information optimally also depends on the learning tasks given to learners. The learning style of a learner is also important in this regard. So, a learners cognitive load depends on what kind of learning conditions he is a part of. If information is carefully given to him under well thought of conditions, he is likely to imbibe more of it. Some conditions are not just favourable for learners to accumulate some new information.

How does this theory work?

It’s important to understand how the training material for a learner is shifted from short term memory to long term memory. The important part is that this information should be well designed otherwise a learner cant imbibe it. Hence the cognitive load on an employee should be balanced and should not include too many scattered points otherwise, the employees cant integrate such information into their brain’s schema. Hence the facts given to the employees should have a focal point so that the employees don’t find it tough to include them in their brain.

Factors that increase cognitive load are present not only in your work environment but also in all aspects of life.

There are three different kinds of cognitive loads faced by an employee:

The cognitive load is huge because the task consists of a special procedure. So, if the user has to be taught several steps, a surgical procedure has to be explained fully to the medical students. But sometimes, learning so many new steps becomes tough for the students. S, the cognitive burden is high in these kinds of processes.

Extraneous cognitive load implies that the load is higher not because of the nature of the process like in the intrinsic case. In fact, it’s high because of the external factors like the environment where the task is taught such as kids making noise. So, the learners might not find it easy to imbibe the basics of the task because of the extraneous factors.