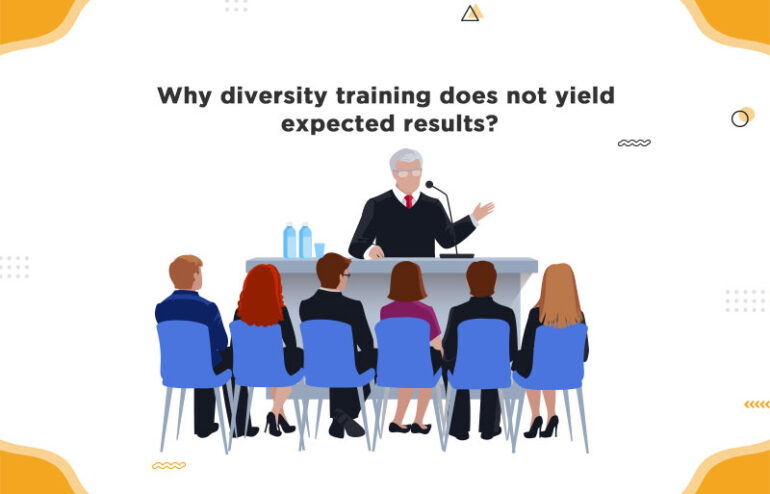 Diversity training is an important concern for companies. Therefore, companies are implementing it in their organizations. But there are many reasons due to which diversity training might not yield expected results.

This kind of training has been the main resource before companies to ensure that employees can file complaints when they are victims of any unreasonable behavior like discrimination in terms of promotion. But such training can’t force managers to behave properly. When such situations arise, such employees don’t apply the knowledge taught to them.

You can teach people about diversity training in theory, but you can’t force them to follow it practically.

The reason for this is that during such training, the learners are taught about the negative ramifications of not following equality-related laws. When they are given information about the huge lawsuits the company can face, it fills them with negativity rather than eliminating any racial bases from their minds.

Managers feel that the diversity training is imposed on them and hence develop a feeling of anger towards minorities. Hence to get the opposite results from such training, it’s better to make it voluntary. When managers and employees sign up for such training themselves, it shows that they are in favor of diversity. It’s also better that the company does not single out some managers for such training because they are responsible for hiring and promoting, and such education should be given to all supervisors.

No attention was paid to hiring test results

The companies have also implemented some hiring tests to make sure that there is proper logic is used in hiring. However, managers don’t implement such tests all the time. It has been found that managers don’t assess Whites for such tests during the hiring process. Such choosy testing has been happening since the 1950s. Hence supervision must be there to find whether managers are using such tests for all the candidates during the hiring procedure. It’s also true that although all candidates might be tested for their selection, their results might not be considered. The hiring managers might ignore test results and choose based on skin color.

The same kind of unethical behavior happens during performance reviews when managers intentionally give low scores to women. And some managers give equal ratings to everyone to avoid any kind of problems later. It’s because when everyone has an equal rating, the management can choose anyone for promotion.

So, it’s better, that, diversity training includes removing the biases of managers against minorities. It is important for this that white managers are assigned protégés for whom they are responsible. When they are liable for mentoring them, they tend to choose the talented ones regardless of their ethnicity and gender. This is because if they choose an undeserving candidate and mentor him, they are wasting time. After all, the latter won’t succeed and the blame for his/her failure would be put on the manager.