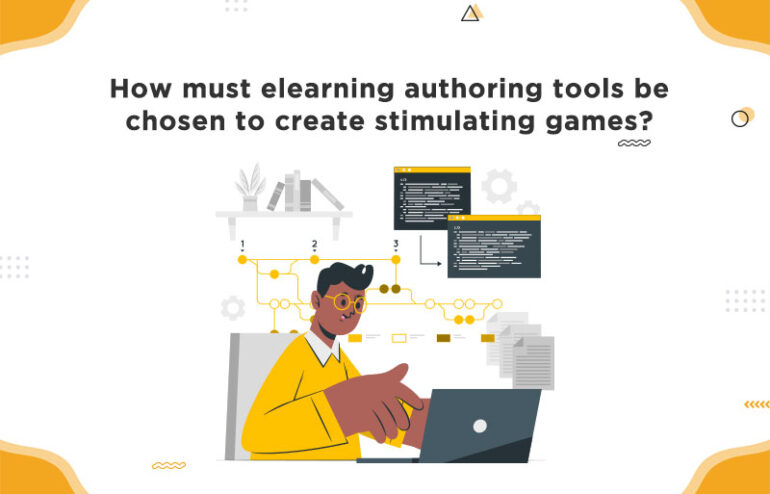 Gaming is an important asset in the e-learning design. However, businesses must choose the right vendor for getting the most entertaining yet effective games. Elearning authoring tools must contain gamification elements so that vendors can come up with good designs. It’s because learners have so many expectations from e-learning. We live in an age where learners like Gen Z have been exposed to advanced games containing 3D characters, so they expect nothing short of an e-learning game. It’s undeniable that Gen Z is addicted to games and they have to be designed as per their likability. Hence, they like to play a game repeatedly until they have attained the desired score. Therefore, they retain knowledge better because they consider games as a practice until they are experts. It has been found by The Game Agency that, on average, a learner plays a game almost 3 times, devoting 6 minutes each. It also enhanced knowledge retention.

Companies have to be prepared for hiring Gen Z(born between 1997 and 2012) because they have completed graduation and are looking for jobs. But they are smarter than millennials because they were born after the internet was invented(1990). They are smarter and have been using smartphones since they were old enough to hold such gadgets in their hands. The games created for this generation obsessed with Candy Crush and Japanese manga characters have to be dynamic and sophisticated.

They are also very career-oriented and hence e-learning content has to be created smartly for these tech-savvy people. Their onboarding also can’t be done through PDF documents; they require an eLearning course. Hence if our eLearning course is not at par with their standards, they won’t learn, quit the course and resign from the job. Hence an eLearning authoring tool must have the following features to allow smarter gamification:

Image editing is also a requisite feature of the eLearning authoring tools because pictures are also needed in the eLearning content. If the software does not offer anything but image resizing, then it’s not of much use. It should offer features such as image background removal etc., pasting an image on another and changing its contrast. Such features in eLearning authoring tools eliminate hiring a graphic designer

The vendors can use sophisticated software like Adobe Illustrator to create vector elements as game characters. However, they can ensure that the eLearning authoring tool also contains images that can be time-saving. Moreover, any authoring tool must have a memory to store these edited images so that there is no need to store the revised image on the PC.

Also, the learners are encouraged more to participate in the games when they see their scores in the form of leaderboards and progress bars rather than just numbers. When they have a leaderboard, they can contrast their performance with other layers encouraging competition. Similarly, a progress bar lets them know how close they are to completing a coveted level. These progress bars and game scoring elements must be available in the form of .AI designs so that they can be customized to match the company’s theme colors.

Apart from this, the eLearning authoring tools must make sure that animation can be introduced in the game so that there is no problem with visual design.

When an animator is hired to create the same effects in Aftereffects, it is time-consuming.

Another inevitable feature of eLearning authoring tools is that they should contain triggers. It’s required because every user can’t access all modules; hence nonlinear navigation is necessary so learners can go to a module depending on certain conditions. For every learner, the experience should be different depending on his caliber.

The games must have a scoring feature that should depend not only on whether a learner completes a puzzle but also on how much time he takes to complete it. The learner might also use different ways to finish the puzzle, such as choosing too many wrong pieces. So, his score should be tied to such decisions also. He must get a negative score if he chooses the wrong piece two times. For example, a trigger should end the game for the user when he fails to finish it within a certain time. Hence, the variable must be choosing the wrong piece upon which a trigger is generated if its value is two.

Hence eLearning authoring tools must have the capability for someone to introduce such triggers in the game rather than uploading JavaScript for such actions. When such scripts have to be introduced, there is a need for a programmer. Sometimes, it’s time-consuming for an eLearning vendor to find such a resource.

An eLearning authoring tool must also have scope for introducing simple games such as drag and drop and branching scenarios. Although there must be sufficient trigger options in a game based on the time elapsed in solving a puzzle, there must be scope for adding JavaScript for more complex actions.

A game can come to life because of the visualization by the instructional designer. But only an advanced eLearning authoring tool can convert such a storyboard into reality.

Hence, the eLearning vendor must thoroughly consider various options before investing in an authoring tool.