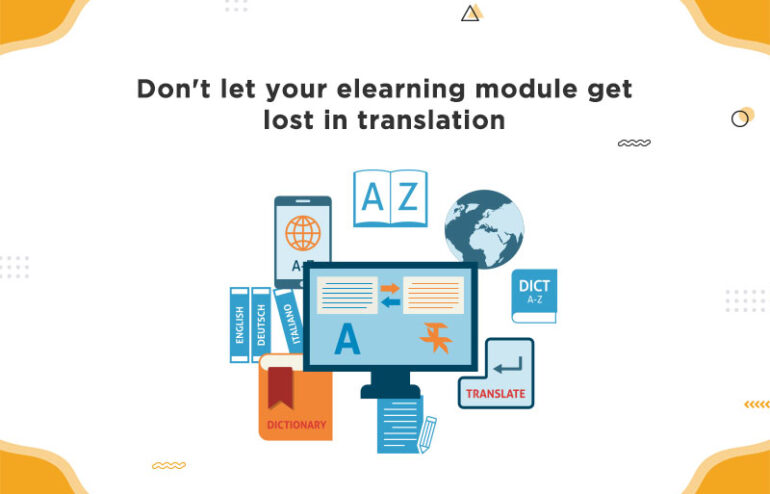 The elearning companies are now catering to audiences worldwide, and it’s not easy to present content in their language.

These are the various problems faced while doing e-learning localization:

Although you can use Google Translate to provide them with localized content, there are problems when this software does not provide the exact word. The best alternative, rather than using an online translation tool, is hiring a translator. Another issue is that the animations have to be generated after the text has been translated to the native language. If the animations produced before the translation in English can’t be used, they have to be changed later to match the translated voice-over. However, with one of the right e-learning companies to aid you, the animation does not have to be changed to match the translation because such an organization creates the timed animation in such a manner that it can be adjusted to any native language voice-over later. Hence, there is a faster production of the translated version of the e-learning module.

Also, there is no need to learn the native language for producing the voice-overs because the e-learning company takes care of it. The e-learning localization is crucial because Google Translate does not generate regionally appropriate words at the end of the day.

Furthermore, such localization helps match the voice-over with the animation, which is important for the module to be comprehensive.
Businesses can find voice-over artists, but it’s tough to find those who know the native language. And the latter are necessary because they only know the meaning of the words in the translation and their correct tempo to be effective.

Sometimes, the scripts written in the English language may not be translatable to the local language, which can cause problems later. But an e-learning company knows the perfect solutions to both these concerns. Moreover, such an organization helps in coming up with the perfect scripts because they have the SMEs to do the job and hire native voice-over artists who know how to give the perfect intonation to the speech.

The images can also cause a problem when the native learners can’t engage with them; for example, when you have included labels for images, it’s better to use the local language. Also, when searching for images, only an SME well versed in the local culture can find the appropriate ones. Hence, businesses need to find an e-learning localization partner who can aid them with this task. It can become a cumbersome task later when the businesses have to replicate all the used images with new ones pertinent to the native culture. The e-learning localization partner may suggest using vector images designed by their graphic designers so that there is no need to replace them when the course is translated to the native language. It’s because illustrations are the same for every language.

Hence, using the vector illustrations of an elearning localization firm avoids the need to get images for English and native language and makes sure that the businesses can generate their translated courses sooner.

The elearning companies also have access to instructional designers so that images can be produced which are not text laden. Hence, there is no need for translation, and as such, they can be used for courses in any language.

Even if you prefer to use text laden images, the formatting gets disturbed when the translated text flows out of the image. For example, this can happen when your image features English text, which has lengthy substitutes in the German language. But an experienced graphic designer is already prepared for such issues and has left enough space in the master slide to introduce the translated words without disturbing the formatting.

The translation problem also occurs for Chinese, Italian, and Spanish languages. The words are significantly longer than their English counterparts in all these languages. For example, the English word “views” translates to “visualizzazioni” in French, which has 3 times more characters. The smaller translations also pose a problem when the same word translates to a shorter English word, and extra space is left on the slide.

In some languages, such as Japanese and Chinese, the width of the characters is much more than their English language alternatives. Hence, when such translations are done, the same word requires much more space. So, it’s again the graphic designer’s job to see ample space for the Japanese word.

The problem arises when someone translates the non-Latin text such as Thai to a Latin text such as English. The text has a lesser line height in the latter kind of language due to shorter glyphs. All the non-Latin script-based languages such Devanagari, Chinese, Korean, Japanese, Tibetan, have taller line heights which again causes formatting issues.

When opting for e-learning translation, it’s better to inform the stakeholders like the vendor about what changes will be made later. For example, you can’t inform them at the spur of the moment that content needs to be translated for employees in a certain language where you might have opened up an office months back. These decisions need to be conveyed even before the project commences so that the vendor is prepared accordingly and has taken the proper resources on board. When the e-learning vendor has been told about the project requirements clearly, he gives the business a realistic idea about the project timelines and costs, leading to timely outcomes.