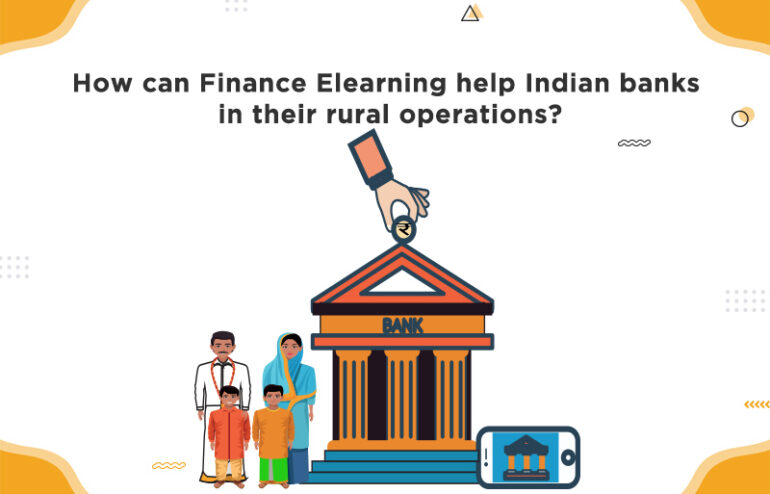 Banks are the modern-day catalysts of change. The jobs in this sector also pay well, but there are significant operational changes that happen frequently. However, given the nature of jobs in this sector, any mistake can prove to be costly.

Although finance e-learning is happening cost is not a factor behind this, because traditional learning is a feasible option for financial institutions despite its costs.

Lack of time is the main factor why financial institutions are deploying e-learning because their employees have fixed work schedules and long commuting hours due to which they can’t attend classroom sessions.

Hence finance e-learning became imperative because banking became a nationwide phenomenon in India. The reason why banks need E-learning content is that its access can be controlled through a VPN. Such security is required because many confidential details are included in such finance e-learning content which should not be accessed by external parties. Only bank employees can access them through their right to access the bank’s intranet. Also, the infrastructure behind such an intranet-based LMS can be handled by the IT department of the bank.

Banking employees need to be trained in finance e-learning because the customers are now using banking apps to open accounts and UPI’s to withdraw money. Due to the pandemic, the internet and mobile banking have come to the fore and hence banks must be able to accommodate such users.

There has been a huge demand for online banking services due to the pandemic. Also, there has been a hike in the number of working people because a lot of employment opportunities have become available thanks to the coming up of mobile apps. With everything becoming ubiquitous due to such apps there is an increased demand for services such as the availability of food and transportation; hence their suppliers have become financially potent to open bank accounts. Therefore, due to the increase in personal disposable income, the demand for banking services will continue to surge.

Also, the banking customers will need bank amounts due to the withdrawal of money through ATMs.There has been a nationwide increase in the number of ATMs to 209,282 in 2020 due because of rising incomes. This has also happened due to the consistent efforts of our Prime Minister due to which the rural people were encouraged to open bank accounts to mobilize their savings into the economy. This was done under the ‘Pradhan Mantri Jan Dhan Yojana (PMJDY) scheme which had 42.44 crores bank accounts opened under it till June 2021.

Commercial banks, like SBI, have been lending to Self Help Groups(SHG’s) in villages to finance their need for cash. These groups consist of 10-20 people who lend money to their members when required. The reason why finance elearning has assumed so much importance is that the commercial banks have expanded their operations to such regions. Banks also provide loans to rural customers. The banks have to train their employees to motivate such people to deposit money through finance e-learning. It’s because villagers are not interested in savings and deposits. Through such e-learning, executives can be convinced to be posted in rural areas. Banks are also responsible for pension distribution of Rs 200 per month to villagers who are at the Below Poverty Line (BPL) level and whose age exceeds 60 years. For those BPL old people who are older than 80 years, the pension amount is rupees 500 every month. This pension distribution is a part of the government’s effort to provide financial assistance through the National Social Assistance Programme where banks also act as a pension disbursement authority (PDA).

NBFC’s extend microfinance to rural borrowers who don’t have enough assets to prove their credibility or approach other commercial lenders. This kind of finance is a great method to improve employment in rural areas by providing funds to open businesses. But as a rural banking executive working in such institutions, one must have finance e-learning to evaluate such borrowers. Apart from fostering entrepreneurship, these loans are also able to contribute to female education in the borrower’s home and better health care for every family member. The banking officers should also be able to carry out an impact assessment of such loans, how they will affect a rural individual, his household, and his enterprise.

The finance e-learning programs can ensure that banking employees get knowledge about various kinds of banks and their diverse products. They should also be able to make villagers comprehend these banking products. The executives also learn how to be proficient in their jobs by enacting role plays which can help in their betterment in customer presentations.