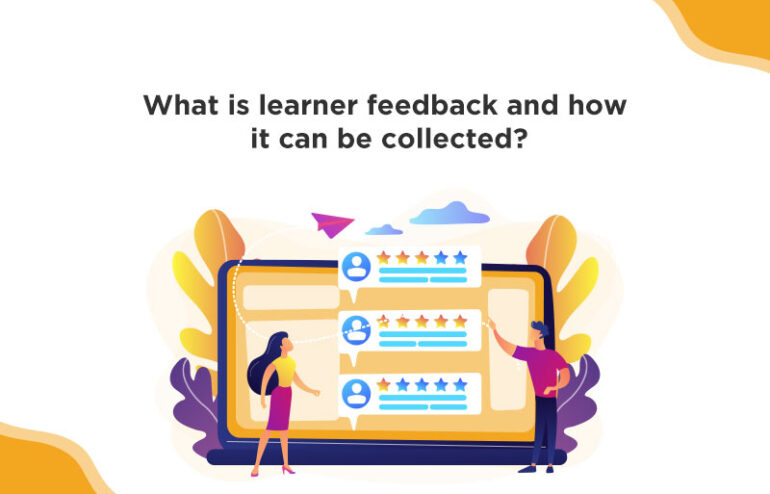 Learner feedback is quite critical to an elearning course. There are generally two kinds of feedback; that are given by the trainer to the user and vice versa.

While the trainer-user feedback gets all the attention, there is no attention given to the feedback coming from users or students.

So, let’s learn about learner feedback given by students.

The aim of the learner feedback should be to collect information from students. Hence the information should be collected in an impersonal manner. They should be given survey forms rather than emails sent to them asking for their feedback.

Learner feedback can be given in three stages, once before the learning commences, after it, and during it. All these kinds of feedback are useful and therefore should be collected.

The feedback taken before the training:

This makes sure that the learner feedback is taken before the issues escalate. So, when the students give feedback, they are assured that it would be included in the training. So, they become interested in the course. They tend to look up the different information related to the course, which includes the schedule of the course. They have an initial impression of the course which will affect their experience with the course.

You can also work on the course so that it is as per the wants of the learners. Before learning, any feedback establishes the goal of elearning. You can also distribute forms to the students which act as a mood checker. These kinds of forms are important to gauge the mood of a student before beginning the class.

During the course feedback:

It is also a very important part of elearning. It can be taken from learners through the chatbot. It can be part of a chat messenger included on the website. The learners can clarify their doubts through this chatbot. The chatbot can be entrusted with the responsibility of clarifying learners’ doubts because some of the questions by learners are repeated.

So, there is no use for a human learner to answer such questions. Once users have come forward with their doubts, then the chatbots can ask them about their experience with the course so far and any recommendations.

Such forms sent by chatbots can have questions about the energy levels of students. With such questionnaires, you can identify any kind of problems in the learners’ group and how they can be solved.

After the course has been completed, there has to be feedback taken from the learners. Make sure learners are sent Google Survey forms to get their reaction to the course. It’s important to get feedback from students to see whether they have grasped something useful from the course.

So, this is how learning feedback can be collected to make a course better.