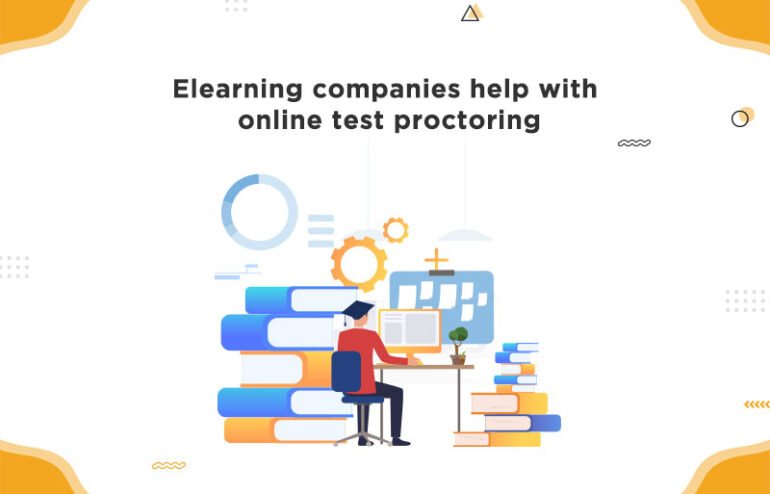 Test proctoring has become a critical concern given the fact that so many tests are conducted online now. These tests have to be designed carefully because otherwise, the business does not know whether its employees have the right skills to carry out the jobs assigned to them. In every occupation, any mistake by employees can prove hazardous to the client.

For example, if someone assigns a company employee, the task of babysitting, the client must know whether the concerned person is certified or not. Moreover, the importance of tests increases in critical jobs such as a pilot or doctor whether the test questions have to be designed judiciously apart from monitoring the test. With the correct questions, you can only get to know whether the tested has the requisite practical skills required for the execution of duties. When someone has to be tested to check his eligibility for occupation, it’s tough for a company to create an online test. E-learning companies USA help businesses when such a situation arises.

Furthermore, since the professional organizations that issue such licenses have spent so much money on the creation of these tests, they need the tests to be proctored for genuine results. The question is whether proctoring is the best solution and fail-proof solution to prevent cheating in such tests.

It’s also crucial to provide the facility of online tests to employees because they can attempt them as per their availability of time, which makes sure the company can hire anyone from a different time zone than theirs too.

The human proctors can catch the fake examinees through live feed

Even if there might be proctors who are watching the live feed of the exam getting conducted at the examinee’s home or a test center, it’s tough to catch someone cheating. This can happen when someone knows the questions before attempting the exam.

Getting a picture of the booklet is not possible because smartphones are not allowed at all in the exam rooms, but what if someone has signed up for a test not to attempt it, but to memorize the questions and sell them later for the best prices? All these unacceptable “fake examinee” behaviors can be detected by a human proctor

Why are human proctors not enough?

Even examinees can also get tattoos on their bodies reflecting certain words in the answers. Now, any examinee with tattoos can’t be prevented from entering the exam hall and attempting the test. So what’s the solution? The solution is using both online proctoring software and humans to monitor the examinees during an online test.

How can e-learning companies help?

Elearning companies can provide tests and AI powered online proctoring software through which the candidates can attempt such tests. Such software can monitor your browsing activities while doing the test, so you can’t cheat through Google. But there is software that can allow you to do so and fool the test proctoring software and can be installed on the system during a test. What to do then?

AI online test proctoring software has replaced human proctors and conducts all their duties like identity verification, audio analysis when the examinee talks to someone during the test, location tracking of the test candidate.

It even disables copy-paste functions during the test. It even alerts the human invigilators when anything suspicious happens through a test through metadata.

Elearning companies USA can help companies get a record of the proper metadata during an exam. So, even if an examinee has such software installed on his PC which allows hiding his browser activities from the online proctoring software, the metadata can ensure he is caught. Such metadata captures the keystrokes of an examinee and if they are too quick then he is using a web browser to read and type the answers. Apart from the prevention of cheating, such software also records the live feed of an examinee attempting the test, which is useful for future audits. This metadata is generated through an online test proctoring software.

The metadata just alerts the proctor that something wrong is going on through the test, to which he should pay attention immediately.

Elearning companies USA with the provision of such online test proctoring ensures that the businesses can train and test candidates in any part of the world. It helps them to broaden their workforce and recruit someone who has been tested fairly for the job.

They can even arrange human proctors who can watch the live feed of the examinees to detect activities such as using cell phones during the exam or having anyone assist them with answers. This kind of monitoring is required when anything escapes the AI-powered online proctoring software.

But is the online test proctoring software enough?

There can be cheating attempts where anyone who is trying to know the exam’s questions can use a drone installed with cameras to take a picture. So, those pictures can be sold at the highest prices.

The test takers want someone to provide them with the test’s questions, so the latter can even use “elf on the shelf” cameras which can record the entire computer screen displaying the questions. So, the examinee already has the questions before sitting for the test, and hence he passes it without cheating. Hence, human proctors are needed to detect such “fake examinees” who are just taking the test to get the questions for someone else.

The test takers are coming up with innovative ways to cheat in the exam thanks to modern technology. They are paying so much attention to getting a hold of test questions before the exam. A test taker can hence ensure that someone else is taking the test on his/her behalf. So although the test proctors might be thinking that a student is taking the test, another person is attempting it by logging on to the server through a fake IP address, due to which it’s tough to find his location.