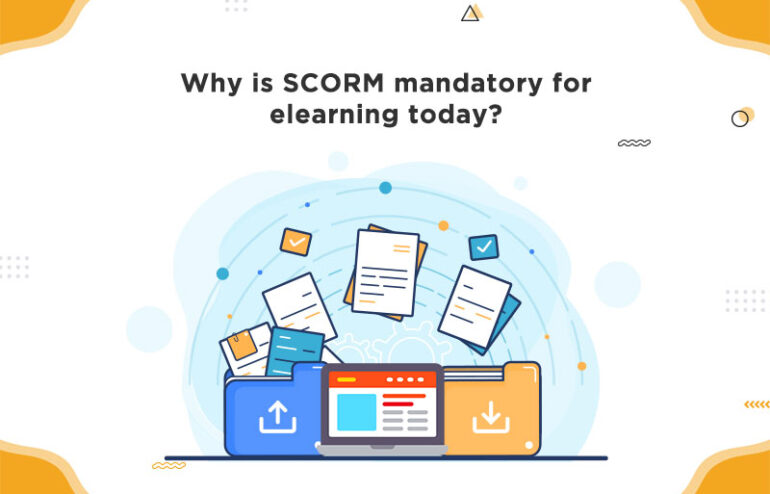 SCORM has become one of the most important factors for e-learning. All authoring tools are indeed capable of producing a SCORM compliant output. When an authoring tool follows SCORM rules, it produces the output in the .zip format. When an LMS follows SCORM, the course can be easily uploaded to it, just like the authoring tool. It also becomes easy to track the learner data when the course has been created through a SCORM compliant authoring tool. The SCORM helps the LMS in gathering the user data based on the course. When the course is SCORM compliant, it can be automatically uploaded on an LMS platform without any kind of human effort. It’s because such a course contains an XML file called “imsmanifest” which contains all the information required by the LMS to upload the course. It gets to know which file needs to be included in which LMS software folder due to this file.

SCO or shareable content object implies that the course’s assets can be used on different platforms like web browsers and mobile phones.

Data collected by a SCORM compliant course: For LMS tracking, a SCORM compliant course provides many benefits such as the provision of data. These kinds of data include lesson_location where the learner stopped reading the content. So, the learner can be asked to resume again from the same point. Another important piece of data is lesson_status which includes the status of assignments whether a learner failed them or passed them or he has not attempted them(incomplete). Furthermore, data such as score_raw is also collected which includes the score of each learner. The time taken by a learner in each session is known as his session_time, through which the LMS admin can guess whether he found a chapter interesting or not. If he has found a chapter interesting, the session would have been of average duration, otherwise, he would have bounced off. These kinds of statistics help an LMS admin what is the time taken to complete a course. Also, the number of chapters that a learner browses in a session, shows whether he can understand anything or not. The total_time refers to the time taken in completing an e-learning module which can help assess its difficulty level. When the score_raw is compared with the mastery_score(total score needed to pass a test) a learner can be told whether he has failed or passed the test.

The SCORM compliant course sends another variable to the LMS known as interactions, which stores the answers to all of the questions attempted by a learner and how much time was given to a single question.

But using SCORM can have the following disadvantages:

Higher costs: The company’s multimedia developers might not know how to work with a SCORM compliant authoring tool. It might also cost more. While choosing such an authoring tool, it’s better to look carefully and compare the different costs, how easily it can be used and the amount of customer support available to you.

You can also get a demo of the SCORM compliant LMS on which such a course can be easily uploaded.