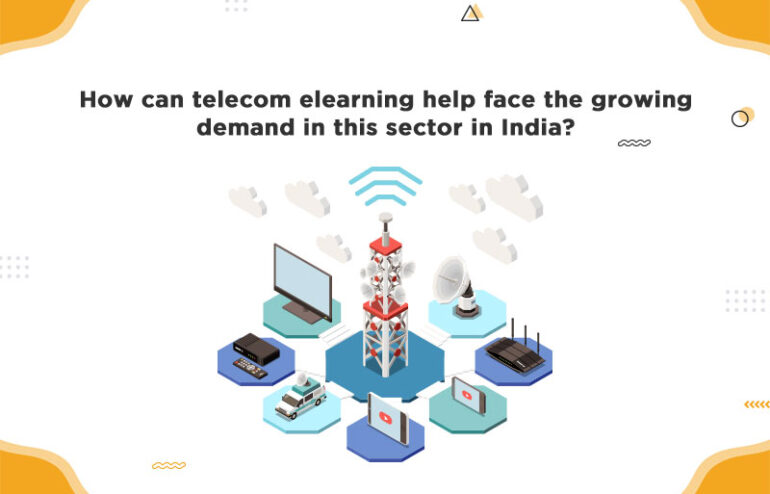 There has been a huge growth in the telecommunication industry in the last decade in India. This has been quite encouraging for this sector, but with such changes, responsibilities have increased also. It’s because these telecom giants are now are coping up with increased business. They have to train so many employees working all over the world because due to social distancing, the customers want to get their phones recharged on a call.
The telecom industry has evolved its services over some time. Now, even for a post-paid connection, you can have a sales executive visit your home and inform you about all the plans.

However, the biggest reason why telecom e-learning has gained popularity is because of the sheer size of the workforce of such companies due to which classroom training isn’t feasible.

E-learning is for different employees in the telecom industry

E-learning can also be targeted to cater to the needs of the personnel of different departments. For example, the telecom industry needs to train the sales force on how they can explain the various technologies to customers. Such companies also provide corporate network connections and the higher-level sales executives need to be trained on them also.

Why is there a need for Telecom e-learning in India?

The telecommunication services have got a boost because access to the internet has increased. After all, children are studying from homes and even office work is happening from abodes now. Every telecom company in India is now using e-learning to train its employees. These kinds of telecom e-learning programs in India include asynchronous programs for the employees and even webinars. Such telecommunications e-learning is also available in multiple languages so that different employees can use it. Reliance is providing such e-learning to its employees and distributors so that they don’t have any issues in selling the products.

The wireless consumer base has seen a large boom in the last couple of years, especially in the rural sector, where people were dependent on wired/landline connections. Telecom e-learning is also needed because the mobile phone subscriber base in the villages has now increased to 59.48% all due to the efforts of sales executives. Now, out of all the telephone subscribers in cities and villages, the users of mobile phones are at 98.1%. Hence, the accessibility of cell phones has increased, and right now India has the highest number of mobile phone owners at 650 million and 300 million smartphone users in 2020 after China. So, right now, 54% of mobile phone owners consist of those with smartphones.

This is all due to the increase in the incomes of an average citizen and such high ownership of cell phones will further contribute to the growth in GDP.

Such high purchases of cell phones can be attributed to the liberal policies of the Indian government. The government plans to attract more people to use DSE’s for internet access as per India’s National Digital Communications Policy 2018. The government aims to provide an internet connection to every citizen at50 megabits per second by 2022. That is why for a network operator, it’s easy to gain entry into the Indian market. Also, FDI (foreign direct investment)is allowed in this sector which has made such a high-growth rate possible. The Indian government plans on getting huge investments from foreign companies equivalent to US$ 100 billion in this sector by 2022.

Hence, there is a decline in cell phone costs due to so many players in the market and deductions in the tariff rates. The second-highest number of app downloads happen in India due to increased connectivity. So, a very less percentage of users are now using landline connections (1.9%). If we take the total figure of telephone (cell phones and landlines) users in India, it is the second-largest in the world at 1.2 billion. That’s why telecom e-learning is now necessary due to such an increased consumer figure.

Consequently, there is also increased employment in the telecom call centers dealing with the various networks which have made this sector one of the most massive sources of employment. That’s why telecom e-learning is crucial to train recruits about the nuances of working in this industry. 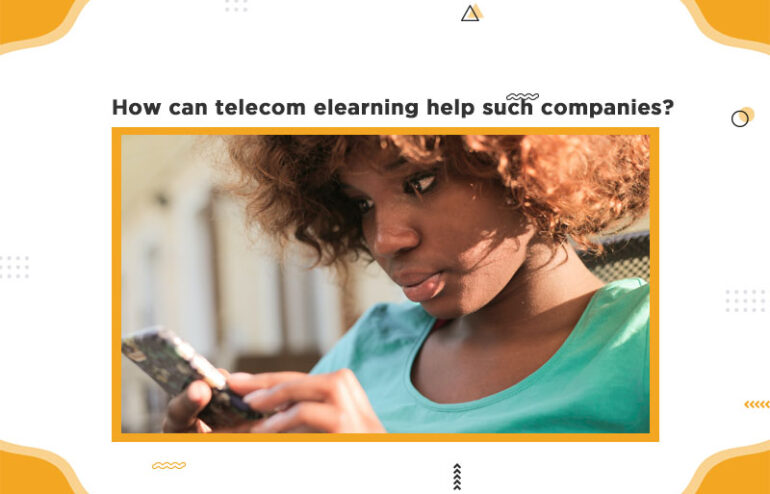 The telecommunications industry all over the world has seen a dramatic change. It’s because this industry has seen this growth because of privatization and competition due to which there have been considerable improvements and hence growth. There is training required to run a telecom store efficiently. This kind of training involves telecom elearning. There is a high need for telecom elearning because there are so many protocols and layers involved in the technologies in this sector.

Training of a large number of employees: When we talk about the telecom providers in the world, their stores exist in every nook and corner. So they need telecom elearning for all such store operators and international branches. It’s because unlike classroom training, where more than a certain number of employees can’t be accommodated in the classes, the elearning does not have such space constraints. Elearning can be accessed by thousands of employees at the same time that can use it to imbibe new concepts.

Telecom elearning is important for dealers who sell the products of the company like SIM cards etc.

They should be aware of the prepaid and postpaid plans to give better deals to customers. Apart from the store dealers, the workers employed by them should also know the latest service plans, etc.

Uniform elearning content: There is also standardization in the telecom elearning. This standardization is due to the standards given by the parent company. These standards are applied to the training content imparted by branches. So, when such training is developed, there is no need to change it in the future because it can be used to train new employees also. Hence, such telecom elearning is employed to train new and old employees also.

Customer service is important for telecom companies because through this way they can sell the maximum number of products. They can also create brand loyalty because of exceptional customer service. The telecom elearning is important because front line staff including the store dealers can be trained on how to understand a customer’s body language and resolve their demands.

Training about new compliance rules: Ever since the GDPR rules got implemented by Europe stringent conditions have to be followed by telecom providers. Now, companies need to ensure that the customer data is saved so it can be supplied as and when the customers need it. So, the personally identifiable information of any customer needs to be stored in a convenient format for this purpose. Customers give a lot of confidential information when they buy SIM cards. The mobile operators have to make sure that even when customers are applying for SIM cards online, their data storage is safe. Their data processing procedures have to be strong for this purpose. Any kind of data breach can cost a company heavily in terms of reputation, so data access has to be monitored carefully. The companies have to ensure that the customer data is stored in an encrypted form so that it’s safe.

Internet service providers have to maintain excess data security. They should get customer consent before using their data. If the individual subscribers of such services want the service provider to erase their data, it has to be done.

This is how telecom elearning can help companies of this domain to boost their sales and follow compliance laws also.