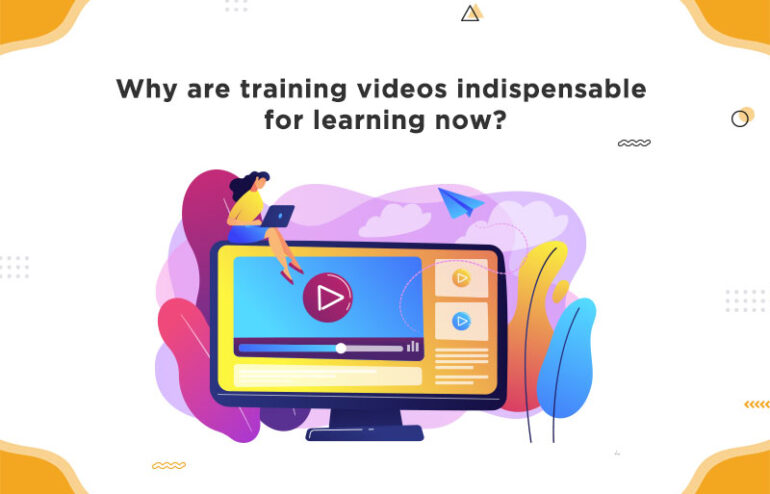 In the modern times, companies use training videos because, through them, they can track whether a learner has watched its content or not. The learner can also be tracked for whether he saw it till the end. Also, nobody can sleep through a video unlike a classroom training session where the learner might not be listening to the trainer, and he is lost when the latter asks a question.

Hence, the training videos are the most effective form of training.

But companies have so many options before them, they get often confused about which one to use. Different situations warrant the use of different training videos. It’s up to the companies to decide which one to use. The companies can use an instructor-led training video when he talks in front of the camera. The instructor introduces other elements in the video like images and slides to explain the concept in a better way. But the trainer must make sure that such videos are short. Such videos are taken in front of a whiteboard screen where the trainer is writing something on the screen.
How-to videos are also commonly used, where a trainer guides a learner through a process. They are extremely popular to explain cooking recipes to learners and involve use of a tripod to create a video.They could be screencast-based videos also including an instructor who sometimes is in front of the screen and has also given a voice-over.

There are also animated videos that have whiteboard animation. Apart from whiteboard animation, such videos also involve character animation and use of background templates through software such as Vyond. The best part is that there is no need for a company to invest in an external content creation partner for making such videos.

They are used for advertising purposes because users can be explained an idea through a character. The animated videos can also include motion graphics, such as rotating doughnuts. They are used to explain some abstract concepts to the learner, like why sales rose during a particular quarter.

There are also simulation training videos that ensure that the learners are explained how to resolve real-world problems like office issues and how to pacify an irate customer on the phone. For example, simulations involving dummies can be used when teaching medical practitioners how to deal with patients with certain symptoms. The doctors and nurses ask the patient further questions to diagnose his condition. Using such dummies is useful because otherwise real patients will have to be arranged for shooting such simulations.

What are 3D Simulations?

There can also be simulations involving 3D characters, created by graphic designers to look like an average worker, but they are costly. Hence, as per the company budget for L&D, they can be used.  Such 3D simulations can be used to explain to the blue collars workers about issues that can arise in machines. These 3D Characters operate on machines and display to the users the steps to take when their equipment behaves in an unanticipated manner.

The Virtual reality technology is used to create such videos where real-life situations are reproduced using technology. So, the trainee wearing his VR goggles watches a virtual simulation created in VR where he has to react to a situation. These videos have been extensively used by the shopping biggie Walmart since 2017 to empower employees to deal with situations like Black Friday when customers throng its stores. The employees find training through such VR videos an exciting experience because they are placed in a simulation where they have to control the objects through controllers. The controllers are connected to a device such as a PC displaying the 3D VR simulation which contains their working-scenario objects.

The companies which invest in a VR simulation have to get it prepared from e-learning companies USA for the best results. The VR simulations have been effective in training engineers who work on highly expensive objects such as engines of Rolls-Royce jets, in which they are taught about the configuration of such objects.

Advantages of using such simulations for training

The training through simulations is also efficient because the trainees are guided to the next phase depending on the actions taken. It’s because such simulations include programming. They are cost-effective for companies because the trainees don’t have to be taken to special environments for training. Instead, they are placed in rooms with 3D equipment, where they are given headsets and goggles to view the 3D model of the work environment/object on the equipment. So, as far as transporting employees to workshops for training is concerned, it’s not needed.

Employees can also be asked to create videos so that they can share how working in the company has been a positive experience for them. They can also describe their tough experiences so that other employees are motivated for overcoming tough situations. Such videos can also be used by seniors to teach other employees about effective ways of working. If the company wants to spread a positive word about a new e-learning course, these videos can be used too.