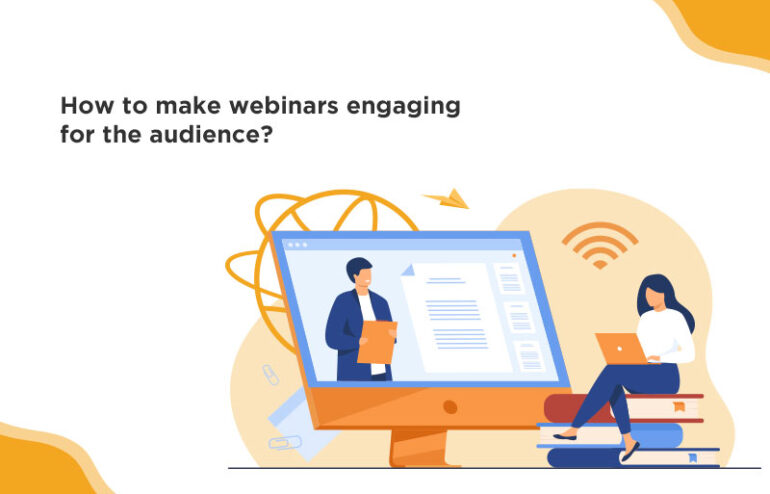 How to make webinars engaging for the audience?

Webinars have become a common mode of instruction these days. Now, what exactly is a webinar?

A webinar is a synchronous form of training or a meeting where the participants might not be in the same room.

But they are connected through a video conferencing tool to each other. For example, Zoom and Microsoft Teams are such tools which connect trainers to learners. These are the challenges in a webinar:

The learners could be helped with training if it is ensured that they are introduced to the basic terminologies of the material. A session can be added to the presentation to make sure learners know why this topic is being taught to them. Another way of inciting the interest of learners in the presentation is to give them a job aid so that they can go through with its content and get an idea about the presentation.

This principle happens when learners are just being made to listen to words rather than being subjected to both on-screen text and narration. The problem is that it’s sufficient to ensure that the learners just have access to the narration. They won’t read the slides once they get to hear the text in the narration. The learners don’t have that much cognitive capability to use their visual and auditory senses at the same time. In fact, by having slides which have audio and text, the learners are facing an extra cognitive burden. This can cause a lesser learning effect for them because they have to pay attention to the text and narration as well. The slides therefore must have either text or narration but not both of them.

It’s one thing that you talk to learners and another thing when you have something to show them. When content is presented to the learners, your head should not be visible on the screen. This can again cause the problem of split attention, in which learners have to focus on the talking head and the text which appears on the screen.

Instead of showing your head on the screen, it’s better to have text shown in the form of animations.

In a webinar, a live instructor is guiding the classroom. However, the learners can be distracted because the learner is not present in front of them. Also when an instructor wants to point the learner’s attention to some object he can’t do so easily.

Therefore, signalling needs to be used. He can use a cursor to point to an object in the room. Another way to get the learners’ attention is that bold text can be shown on the screen.

Also, when a learner is being shown slides, there does not need to be unnecessary text on the screen because the learner’s attention can get deviated. It’s because when you are speaking, the learner will listen to you which is not the same when content is getting presented to him on slides.

In webinars, a technique can be applied known as self-referencing. It implies asking learners what they would do with the information in the future that they have just learnt.

You can also ask them whether what they have learnt now has affected what they knew about this topic in the past. So, they are referencing to themselves when they do self-referencing.

By applying the above-listed techniques, how webinars can be made more interesting.