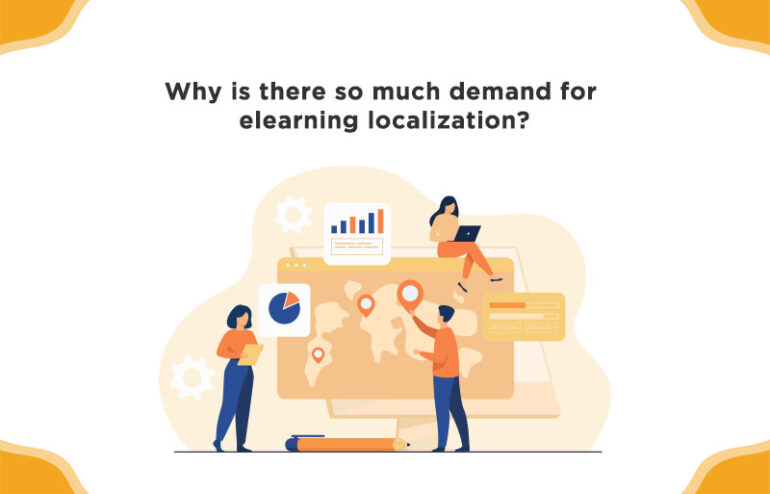 Why is there so much demand for elearning localization?

There has been so much change in the hiring situation now and companies are taking in employees from all over the world. International employees are working in every company either in headquarters or in local branches. Globalization has also happened when it comes to selling products because companies have different markets now. But training has to be provided for customers to be able to use such products manufactured by an international company. Therefore, the eLearning localization must be there, both to train international employees and customers.

When you can sell in different markets, the profit base increases. Apart from product selling companies, eLearning organizations also benefit from the localization approach because they have an expanded customer base. They can grab the attention of different learners in various countries because courses have been prepared in their local languages.

If you can please the local learners, you can create a demand for more courses in their local language.

There is a high need for elearning localization now because so many Europeans and Asians don’t use English as their medium for reading internet content.

There is only 20% of the population in the world that uses English. So, the rest of the market is still untapped with courses prepared in English. They can’t understand such courses. Although Indians are taught English in schools, many of them still don’t comprehend it. Only 12.18% of Indians can speak comfortably in English, rest cant. So, they need eLearning courses in Indian languages. In China, this percentage is even less where 0.9% of the population can only speak English and understand it. Considering, India and China are the two most populated countries in the world, this means a large part of the world’s population still can’t speak and read English.

There is a high need for eLearning courses in Asia but in the local languages. It’s because of the booming technological expansion in this country. There have been so many technological startups in this country by foreigners who want to sell their software here, but they can’t due to a lack of understanding of English. So, eLearning courses need to be localized in Asian languages. Since everyone in such countries owns a handset, this implies that the reach of eLearning localisation would be immense through such gadgets.

Difference between localization and translation.

Elearning localization is quite different from translating content into the local language. Translation refers to converting one language into another and it can be easily done with the Google Translate tool. But localization takes into account, the culture of a country and then converts the images and text into a local context. For example, you should refrain from the mention of the term “beef” in Indian e-learning because the cow is treated as a sacred animal in this country.

There are many parts of an eLearning course, that have to be changed in eLearning localization which includes content, graphics, date formats and the text on buttons. Graphics for food need to be changed because different countries have varied staple diets. You can’t include food items that one country has not even heard of.

How to do eLearning localization?

The eLearning localization should be kept in mind while the preparation of a course has just started. This means that there should no use of local slang used in British English or American English because it can’t be converted into a local context. The brand slogans also need to be adapted to the local country’s language, they can’t contain any reference to Britain, the US or any other country where the course was prepared. This would make sure that elearning localization takes less time.