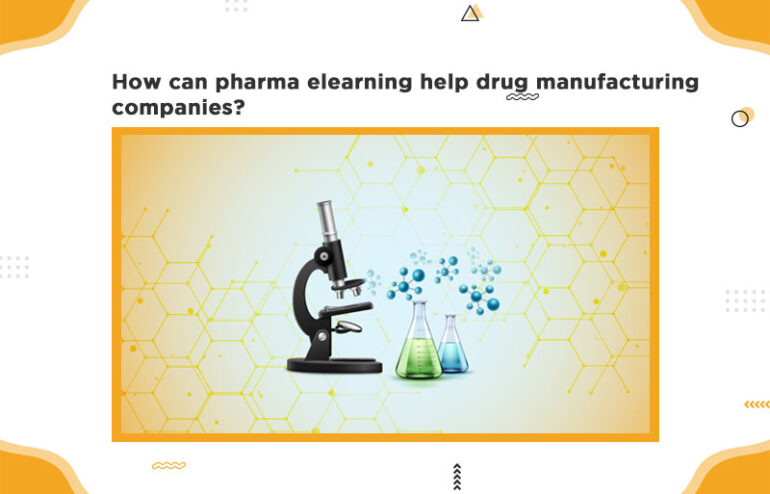 Pharma e-learning is crucial these days when so many drugs get invented and approved every year.

The companies in this industry, make sure that the employees work efficiently so that they give their best performance. This way, the employees can get the best job aids for their work.

The basic challenge in the pharma industry is the continuous introduction of new drugs. The companies need to provide information about such new drugs to employees. The workforce must be trained to ensure that they can use such drugs. Although every sales personnel hired by these companies gets training about 1-3 months before the fieldwork, every time, this personnel can’t be gathered to get training about a new drug. That’s why a pharma LMS can be used to disburse all the information.

Some of the advantages for the pharma e-learning industry include:

Avoidance of medication errors: The drugs have to be administered in the right doses.

The FDA has given a proper definition of this kind of error known as a medication error. This kind of error can cause harm to a patient. According to the definition, the error in the consumption of the drug can happen when the doctor is preparing the prescription for it and enters the wrong dose amount.

Even when the patient is seeking telemedicine and the doctors type the wrong dosage amount on the PC. In case, the drug is being given to a patient, he can be provided with the wrong amount by the medical practitioner.

FDA has prescribed several rules for the consumption of these drugs which can prevent deaths and other kinds of harm caused due to an inappropriate dose. These harms include the victim suffering from a life-threatening condition or hospitalization as aftermath. Other serious consequences can also occur, such as when the drug is administered to a pregnant woman, it causes a defect in the unborn child.

So, the medical practitioners have to be provided with the right pharma elearning to prevent such costly mistakes from happening, which can harm the reputation of the drug manufacturer. The staff has to be elucidated on the FDA prevention measures for such errors which are:

How much should be the time gap between different doses of the drug in a day. This information should be included in the imprint codes of the tablet.

This is important because otherwise the patient can get confused between tablets that have the same color, size, and shape. This kind of imprint code can include the manufacturer’s logo or the National Drug Code(10 digits in number). The strength of the drug included in the form of a number like 0.5mg of a substance contained in the drug is also preferred as an imprint instead of the manufacturer’s logo.

For example, a drug imprint can be in the form of M367. The letter M stands for the manufacturer’s name such as Mallinckrodt Pharmaceuticals.

The digits 0367, refer to the 4-digit code used to represent the drug manufacturer or the labeler. There are 3 other digits following these 4 digits used in the National Drug Code, which include the form of the drug whether its tablet, capsules, or liquid, and the strength of the drug i.e. quantity of substances. The last 2 digits included after the drug form represent how many tablets are present in a bottle of the medicine.

FDA has mandated that all oral drugs(whether OTC or prescription) should include this information. All this information has to be taught to the workers, especially the sales personnel of a drug manufacturer through pharma e-learning. Even such elearning can be arranged for doctors.

Such scanning of bar codes before prescriptions is important because new drugs with new substances are getting released into the market every day and the doctors might not know them. This bar code also contains information about the right dosage and the right way for the drug to enter the patient’s body, whether it’s through the nasal route or the mouth. Pharma e-learning makes drug manufacturers aware of such new rules.

As per these new rules, the cream should be packaged in such a way, that the consumer does not confused about whether to put the cream in the eye or the ear or apply it on the skin.

If the cream is packaged in a bottle similar to that used for eyedrops the consumer can put it in the eye leading to severe implications. Again, pharma elearning can prevent such errors.

Similarly, if a drug has to be consumed orally, oral syringes are given for this purpose. If a liquid oral dosage accompanies this syringe, the markings on both should be in the same measurement standards as millimeters. With different measurement standards, like millimeters on the syringe and milliliters on liquid dosage, confusion can be caused for the consumers.

Again, sales personnel can solve this confusion by guiding the patient or drug companies should make sure that the measurement standards are the same. This is how pharma e-learning can save drug manufacturing companies from penalties.

These penalties can be imposed when the patient suffers from an injury or a life-debilitating change after a medication error. So, if it is the fault of the drug manufacturing corporation, which does not conclude with the death of the victim, it can result in a penalty of $200,000.