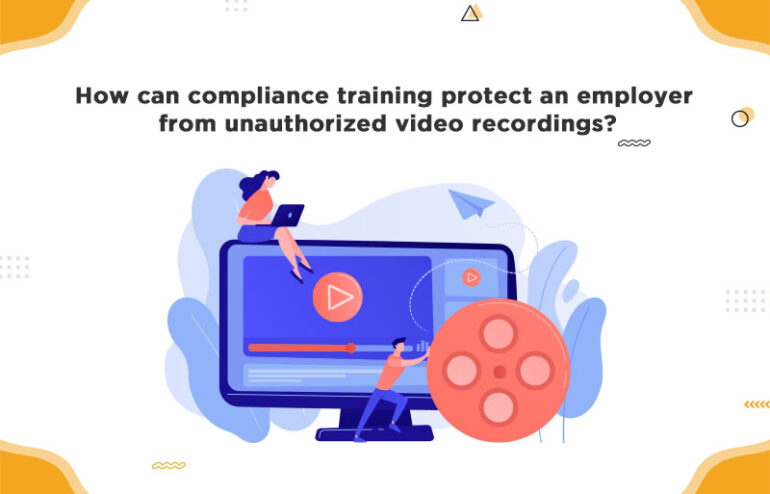 How can compliance training protect an employer from unauthorized video recordings?

Video recordings have become critical for organizations ever since online meetings started happening. Now, such meetings are the norm for the office culture. How should organizations go about such meetings? It’s because they can record them for future reference.

How can compliance training of IT staff help?

Although the recording of video calls is allowed, it can’t be done without the consent of both parties in some US states. Apart from that, organizations also need to decide where to store such video recordings because it’s highly confidential and can’t reach the wrong hands. Hence, e-learning of the IT staff is important in such matters. The companies can now use any of the platforms for storing such content. When a company conducts meetings through Microsoft Teams and records them, they are automatically uploaded to Microsoft OneDrive, so they can be shared with anyone. You can share such a recording with someone who attended the meeting. But the person who is recording the meeting must have enough storage in the OneDrive so that the recorded footage is uploaded.

The danger of unlawful video recordings has increased ever since employees have been allowed a BYOD(bring your own devices) to the workplace policy. This is actually dangerous for companies because employees can record everything that happens on company premises and upload it to social media. The employees can also use such footage to support the fact that a manager treated them with a bias for salary appraisal. They can sabotage a company’s reputation through such recordings. An employee can record an employer firing somebody and use social media to tarnish the company.

The company can create rules by providing compliance training for the IT staff who can draft the video recording rules, but that’s not an easy way out.

What about employers recording employees?

As far as an employer’s right to record his employee is concerned, it can be done when there is no reasonable expectation of privacy by the latter. However, there are designated areas in an office where privacy is expected, such as bathrooms, changing areas. In every state, it’s not allowed by law to record an employee in the above-mentioned areas. Hence, a company can install video surveillance systems until and unless they don’t violate an employee’s right to privacy. For installation of audio surveillance, the laws are different.

But when an employer is not aware of the recording happening?

Sometimes companies might not be aware also, that an employee is recording something because he is using a wearable to do it. Gadgets like a pen that has a voice recorder installed on it can be used easily for recording without catching anyone’s attention.

Also, every US state has different laws for recording without the consent of all the parties. Some US states don’t even require the consent of both parties for the recording to be legal. Employees can record their managers without their knowledge, and it will still be permissible as evidence in the court. So, if your manager does not know of being recorded in such states, he can’t file a lawsuit against you. A majority of US states have this one-party consent law, where recordings can be done without informing the other party.

The government organizations such as the Department of Labor have also allowed an employee to record an employer’s activities without the latter’s consent when it’s done under special circumstances. Such circumstances include that when an employee is recording any radiation contamination activity happening in his company; it’s not illegal as per the Energy Reorganization Act.

NLRB(National Labor Relations Board) has already declared that although a company might have stated that surreptitious recording is illegal, it is legal under the circumstances where

So an employer cannot stop an employee from recording anything, even without consent, when it pertains to the above-mentioned conditions. This makes compliance training of the staff crucial that prohibits employees from bringing recording devices to the workplace. Hence, there can be policies in place to ensure that employees are not allowed to bring recording devices where confidential business information is exchanged.

compliance training elearning companies in the US