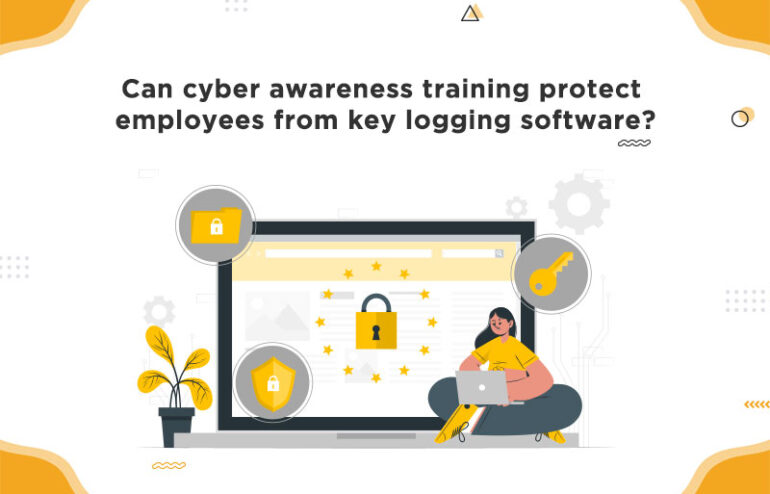 Cyber awareness training must include the prevention of installation of the keylogging software because they are now the most prevalent method of cyberattacks along with phishing.

The training of the C-level employees is important too because any data breach with them makes the company more vulnerable. They have access to the most sensitive data of the company, and hence their training should be a priority.

Companies are implementing cyber awareness training but still, problems get caused due to the ignorant attitude of employees. The companies hence have to make sure some checks are made mandatory for company employees. For example, a company needs to make sure that if there has been a security lapse, it is reported on time. An employee could be browsing some unanticipated sites, leading to malware getting downloaded on his PC. His fellow employees could report his behavior and then action could be taken on time and the malware could be removed from his system. But the reporting employees’ identity should be protected so that he does not face any consequences of his actions. The employees could be informed about the hotline for filing complaints through sticky notes etc.

What is keylogging software/hardware?

Keyloggers don’t need to be only in the form of software. There are such devices, too, attached to the computer or the keyboard that can intercept the keystrokes.

Such software/hardware allows a lot of privilege to the user because he can get all the information such as the webpages visited by a victim and text which is copied and pasted. This key capture software is used when the parents want to monitor what sites children are visiting in their absence. It’s because such software can read what the children type in the browser.

How to tackle them?

Employees must be made aware of how pivotal a role they play in the cybersecurity of the company. The cyber awareness training is not a one-time event, and it should be imparted continuously for best results. In a situation, when a company has detected that a key capture software is getting used, it must have an incident response plan in place.

The employees should be given all the details about the incident response plan to be implemented in case a security breach happens. All the participants should be trained about their specific roles in this plan.

The employees have to be elucidated about how they can prevent the installation of a keylogging software on their system, which can happen in many ways:

Antivirus software: A user should have antivirus software installed on his system so that when he gets an email from an unauthorized source, he does not open it. Even though he might open this email, he must not download and install the email attachment including games too. A keylogger can also get access to a PC when a user visits a malicious site that has an expired security certificate. Such websites can also download a payloader software to the system, which can download and install a keylogger.

He should also not open up malicious popups and click on any mp3 files on the internet to play them and any YouTube videos.

Hence, how to prevent keyloggers from finding your keystrokes?

A user can also ensure that the keylogging software is not able to detect his keystrokes when he is using a virtual keyboard. This is because through this software the user does not press the keys on the keyboard hardware to type, but instead uses the mouse to touch the keys on the virtual keyboard, which can’t be traced. The windows operating system already has this feature enabled in its “accessories”.

Encryption can only help you in protecting against data theft through keylogging software. Through cyber awareness training, employees can be taught about how to use anti-keylogging keystroke encryption software. The keystrokes are encrypted through this software and can’t be detected by any keyloggers installed on the PC.