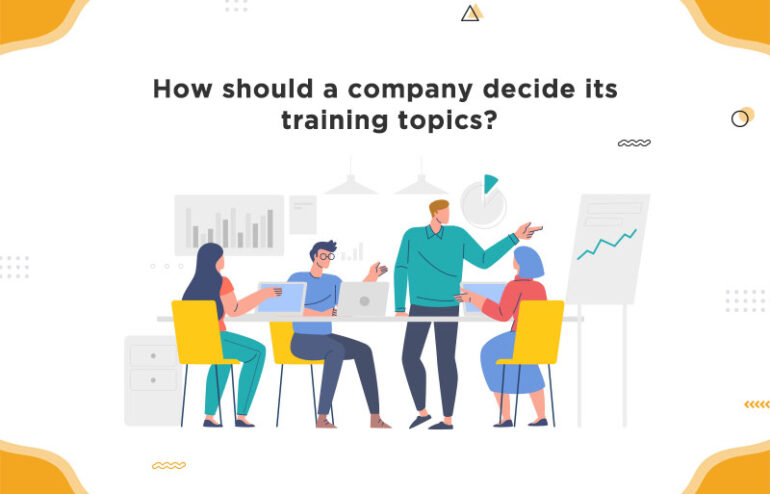 How should a company decide its training topics?

E-learning technology has made great strides all over the world. But how should this content be devised to address the maximum training needs? The following steps can be taken:

The companies are implementing training to make the employees work better. The objective information revealed during VR based simulations also forms a basis of training. For example, if a certain worker has undertaken VR training to improve his soft skills but has failed in some aspects, like his voice modulation, tone, sales pitch etc., it shows how an employee is performing against his KPI’s.

These gaps can be used for selecting training topics, as the recorded employee’s performance in such a simulation can be measured against his KPI’s such as the Average Handle Time. This time metric for, an agent measures the time he picks the phone to the time it’s disconnected. If this time is too much, this determines the agent can’t retrieve answers for the caller quickly.

Similarly, First Call Resolutions are also crucial for such call center agents, including the percentage of calls an agent answers without transferring them to his senior or returning them. If an agent has to disconnect the phone because he is no information about a caller’s queries and calls him back again, it’s not that desirable.

The task analysis allows companies to gather valuable data about what skills are required in employees to perform the necessary tasks and hence come up with the latter’s training topics.

Such an analysis lists the tasks required to meet the listed duties per the job description and helps companies provide effective training to workers.

It also consists of how the high performers do the critical tasks. Their performance underlines behaviors and knowledge, which are crucial for improving the work of not-so-good performers. Such above-average performers might have some characteristics necessary for such job roles.

Such job task analysis can be done with managers and employees through interviews about the tasks contained in such roles.

When such job task analysis has been created, the next step is to ask managers and employees how they rate themselves on 1-5 at execution of tasks. Managers can also support the ratings of individual employees and provide a proficiency rating for each of them from low, average, to high. For example, there might be a difference between the employee’s opinions of themselves at a task and managers’. Such a disparity implies that both have a different understanding of the task.

Importance ratings are another set of data that the L&D team can use. This data consists of asking the employees how important a task is. If managers also think similarly, this task is crucial and requires training. But managers and employees can differ in their opinions about the criticality of a task for a job. Hence, depending on the ratings of employees and managers, devise the training content.

After the importance(significance) and proficiency ratings have arrived, the L&D team must analyze this data. The tasks that have received the highest importance and lowest proficiency ratings regarding the percentage of employees and managers must be considered training topics. For example, if most employees and managers consider a certain task critical, but not many of the former and the latter consider them proficient on that one, there is a performance gap.

Based on the company and individual goals:

An LMS is also a useful resource for conveying goals to employees. When employees know they have a benchmark, they improve performance to meet it. The companies can ensure that everyone sees the employees’ goals to get the requisite support from the other departments. If some teams can contribute to the goal achievement of others, they can share their knowledge for the same. Apart from giving goals to employees, they should be given an action plan and time frame on how to attain them.

The manager must devise this action plan. For example, one can only attain marketing leads with a minimum social media ad budget. This way, a marketing manager has his work laid out for him and can even ensure cooperation from the content team who knows his target. Once employees have a crystal clear idea about the individual and company goals, they are motivated to do better. When everyone is aware of each other’s goals, they know who to hold accountable once their own goals are not met. Based on such goals also, a company can create its training.

Such data can only lead to effective training in attaining company goals.

elearning companies in the US training