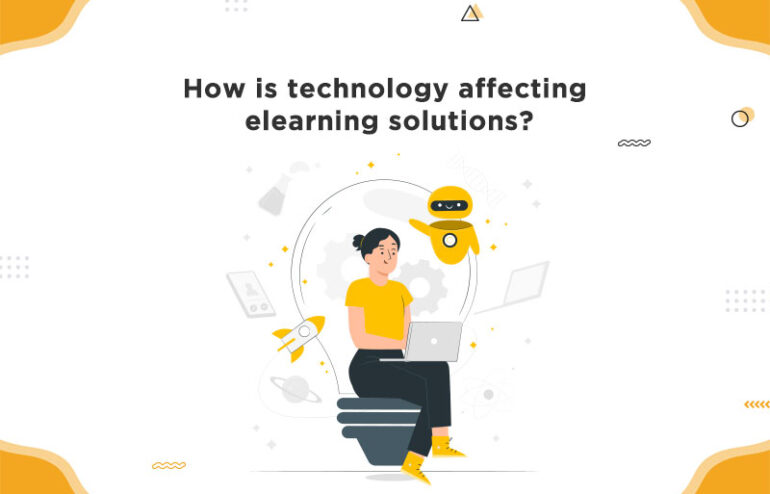 How is technology affecting elearning solutions?

The workplace has undergone a tremendous change ever since the pandemic struck. Extended reality(XR) is becoming a commonplace phenomenon, but what does it refer to. Extended reality includes all forms, including mixed reality, augmented, and virtual realities. All these technologies connect humans to PCs and change reality by immersing the learner in a new world(virtual reality), increasing his surroundings with virtual objects(augmented reality), or combining both(mixed reality).

What is mixed reality?

Mixed reality(MR) is the new form of technology in which the real and digital objects coexist.

It’s true that through the use of this technology, the students can be shown 3D projections. They can touch them and get to feel objects like dinosaurs. This kind of technology is even useful for teaching factory workers how to work on a machine because they can be shown a holographic template of the machine and arrange all its parts.

There can be an extended reality elearning solutions system that allows companies to provide training to employees irrespective of where they are.

So, the learners are shown holograms through an app on their phone, which also monitors their activities. The learners can be reached anywhere without any wired connection. The user can access the app through their smartphone and view the entire course in the form of holographic screens.

This mixed reality is going to be immensely useful in medical e-learning solutions.

The doctors could easily transfer files from their PCs and read them.

The engineers could work with 3D holograms of dams before executing anything. This could save the money spent on applying labor and materials to the actual construction. With an MR headset, the users can close the room’s virtual windows with their hands.

So, it’s unlike augmented reality, where virtual objects are overlaid into the real world like you could read the patient’s vital signs or even get to know his blood pressure. All this is possible through smartphones that have AR-based apps in them that scan real-world objects to add more details. For example, you can add so many accessories like wigs and hats on yourself when using the Snapchat filter. The AR technology can also simulate the empty cash register with loads of cash and gauge the employee’s reaction.

What is virtual reality?

Virtual reality is used to train the medical interns who can be given a headset and controllers to move virtual objects like medical objects on 3D simulated human body models. So, the intern has no cognizance of the real world while he is getting his VR based training.

When the learners are wearing the VR headset, they get transported into a new world like taking a stroll on the moon, so this technology is useful for teaching them about scientific concepts which can’t be recreated all the time, as the underwater life.

No contact eLearning solutions: Virtual reality has become an essential part of employee eLearning solutions. The employees cant be indeed arranged together for an onboarding solution. So, recruits can be given practical training with virtual reality-based headsets where they can touch a machine. They can also be given the practice to talk to virtual humans who react similarly to us through such headsets only. The best part is that when such training sessions are recorded, HR can check the human feedback and know the areas where employees need learning. All the vital stats of an employee are measured when he is part of a virtual reality-based assessment.

Contactless interactions: It’s also possible with virtual reality that employees can attend parties whilst sitting at homes. They don’t have to worry about reaching home on time or even contracting an infection because physically, they are present at the house but virtually, at a party. The employees can take part in virtual games and virtual karaoke sessions. Such chats where employees have taken part through their avatars are excellent ways to break the ice and aid in relationship building.

Iron Man has often been seen using augmented reality where he works on a hologram-based diagram of his PC. He just uses his hands and moves the objects in a virtual dimension. Privacy will be a major concern when using XR technology. It’s because, at the end of the day, when MR devices simulate the real environment, they will have to be stored, which is costly. Also, privacy can be a major problem because any details about a user’s surroundings can’t be leaked.