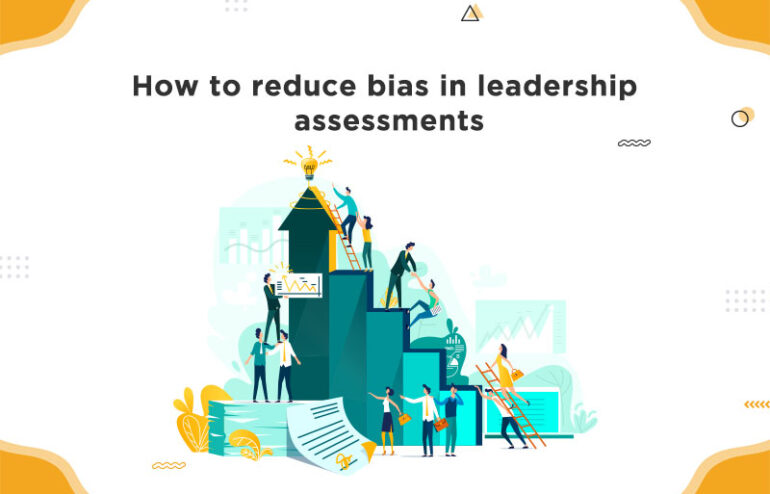 How to reduce bias in leadership assessments?

The leaders sow the seeds of change. But sometimes, leaders cannot carry out their job in the right direction. Organizations must establish a clear strategy for themselves which is vital. It is then the job of the leaders to ensure that the employees adhere to the changes incorporated as part of such strategic implementation and new policies.

Hence the senior management should show some required behavior, including accommodating new changes so that the leaders can make the rest of the team follow in the same direction. When it’s not so, and not-so-clear strategic goals are established, or the top management does not work in collaboration with each other, the middle management or the newly trained leaders can’t deliver the results expected from them.

There can also be problems in communication between the middle and the top management, which prevent an explicit bottom-up interaction as to what problems are faced by leaders. The senior management is only used to having a top-down approach to communication where interaction is only one-sided. There could be infrastructural problems due to which employees can’t work towards the company’s new goals or lack of coordination between different branches leading to an effect on the performance of employees.

It’s true that choosing the wrong leader can occur. It often happens because organizations consider a person’s personality and academic qualifications. The person might have excelled in the past as a leader in a different industry, but he may not be able to adjust to the same role in another industry.

Corporate learning also requires assessments to measure what the employees have learned. But evaluation should be included in the training situations so that trainers know what is lacking. When assessments are a part of the training, the trainers get to know the reason for lackluster training data, like high time which is taken to complete a lesson.

Leadership assessments also help an organization evaluate whether a chosen candidate is ideal for the role.

These assessments are used in all organizations to assess whether a chosen candidate is good enough to be a leader.

But there is bias in such survey results

But leadership surveys are not genuine indicators of how good a leader will be. They only give good ratings to someone thought to be a good leader but not an actual good leader. For example, in such surveys, white men are given better ratings and opinions than black men. Even women are not perceived to be better leaders than men.

Therefore, the questions must be carefully curated in a leadership assessment. This way, such assessments would have no scope for racial or gender bias. So, questions have to be framed, asking the employees whether their preferred leader displays a specific behavior.

You must refrain from asking questions in such a survey about whether the leader shows acceptable behavior or not because something unacceptable for someone may not be acceptable to others. Any favoritism towards them will draw positive comments from the participants in such surveys, and hence questions have to be drafted judiciously to get rational answers.

There has been confusion worldwide over the correct leadership behaviors which encourage others to take action. Whether an employee is capable of becoming a successful leader can be judged by the similarity of his behavior to that of successful leaders.

Therefore, the significant patterns of their behavior can be described as important for someone to be an effective leader.

When organizations understand that someone who is not considered a leader but has all the leadership qualities can be promoted to this position, it’s beneficial. It’s because when he/she is promoted and shows desirable behavior as a leader, the others can all learn from his example. The employees can be encouraged to select the correct leaders through such steps:

People must be shown the right examples of a leader before taking part in such surveys, i.e., assessments. First, they can be asked to evaluate how effective a model leader is to them. Then they can be made to evaluate a real leader. When the employees have an image of an excellent leader, they are likely to rate a candidate leader in comparison with the former rather than rating the latter based on his personality traits such as his complexion, etc.

So, the raters in such surveys should be questioned about the essential leadership attributes. When they answer such questions, the inherent bias in mind towards someone that he is great leader material is removed. Hence it’s important to provide an example of a quintessential leader to company employees.

The second way is to ensure that the raters are giving the correct reason behind selecting a leader in such assessments. They should be asked why they consider a certain leader great. Has he shown some exemplary behavior because when they are asked to come up with behavioral examples and can’t, they know that a certain person does not qualify to be a leader?

For example, they might have given a high score to a potential leader on a certain behavioral parameter. Still, when raters can’t recall any incidents of such behavior, they realize they don’t have a real reason to select that leader. After being unable to come up with any incident reflecting such behavior, the raters can adjust their scores given to leaders.

When the leaders see such scores, they can use such feedback to rectify their behavior towards others, making it more acceptable as a leader-like behavior.

People also don’t have enough time to evaluate whether a person has the skills to be a leader. Therefore, people use heuristics while evaluating a leader due to a lack of time. But raters should be informed that they are not pragmatically assessing the information related to the leaders. Hence the raters should know that unnecessarily criticizing a leader can lead to negative consequences for him.